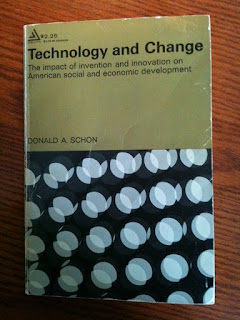 In my quest to read (or re-read) all the books by Donald Schön I am at the moment re-reading his "Technology and Change--The New Heraclitus", published in 1967. I really liked this book when I first read it many years ago, but in a way I think it resonates even more with our present time. It is both possible and easy to read this book as a strong argument for what is today called "design thinking".

Schön builds the whole reasoning in the book around how humans relate to stability and change. Parmenides and Heraclitus are presented as advocates of two archetypal ways of understanding reality in relation to change. Parmenides represents the view where "stability was the only reality; being was continuous, changeless, one; change, in the form of creation or passing away, was inherently contradictory and therefore illusory". On the other hand, Heraclitus saw change as "the only reality" and to whom stability was illusory.

Schön makes the case that society still hangs on to an understanding that is basically Permenidian, even though such a view do not fit with the radical and constantly ongoing  technological development that defines our society (and did already in 1967). To cope with such an environment, innovation becomes a core activity and road ahead. Schön writes something that could be written today "Creativity, for the scientist, engineer and marketing man, and generalship in innovation for the manager, now rank with such traditional corporate virtues as loyalty, steadfastness and financial shrewdness. Increasingly, performance in the corporation has to do, in one way or another, with invention and innovation".

In the book Schön dissects what he sees as the dominating understanding of innovation which he calls the "rational view" based on a Parmenidian understanding of reality. He then presents an alternative and Heraclitus inspired view of change, hence the title of the book. It is fascinating to see how in this early book he already have a "theory" of change that later becomes the foundation of his more known work on reflective practice.

Maybe the least known and also most exciting part of the book is when Schön develops what he sees as an ethic of change. In this part of the book he is not as clear as he usually is, which I see as a sign that these ideas are work in progress. Strangely enough, this work on ethics in relation to change and design is something he never really came back to, maybe with an exception of the last chapter in "The Stable State" and in some way in his "Frame Reflection". This is definitely worth some more studies....

Ok, that is it for now....and to repeat myself from some earlier posts. To read Schön is highly recommended. His ideas are extraordinary grounded in solid philosophical reasoning while also based on his professional practice in industry. When a book about technology and change from 1967 feel fresh and exciting to read it is a sign that it contain some great and timeless ideas!
at November 02, 2011 4 comments: