Why "Just Enough Is More" is not Enough

In an article on FastCompany's site Co.Design, Tom Hobbs writes about the state of UI design. He argues that "the aesthetic of UIs has followed a dominant ideology that attempts to replicate the physical world". Hobbs is quite skeptical towards this form of "skeuomorphism". The basic argument that Hobbs make has been made before and is a reasonable one. At the same time when Hobbs argues against what he sees as a problematic, or even dogmatic, design philosophy he ends up advocating another philosophy, almost in a similarly dogmatic way.

I have no problem with Hobbs general statement "There’s a lot of making and thoughtful critical analysis to be done of the solutions we create before we evolve approaches and philosophies that are truly unique to the discipline of UI design." This is all good and well. But when he continues and writes that "To do this, we need to design UIs that are stripped down as much as they can be. This means avoiding superfluous and gratuitous ornamentation, both visually and through how they move." Avoiding to copy or metaphorically use the analog or physical world does not have to result in "avoiding superfluous and gratuitous ornamentation" or to follow “just enough is more” (which Hobbs also advocates).

To be designerly means to be able to understand what is appropriate for a particular design. It means to be able to make the required judgments about all aspects involved and about how they come together as a whole in an adequate composition. It is not about applying any predetermined set of principles or patterns. To have and constantly develop once own design philosophy is crucial to any designer, but it does not mean that design should be based on a preconceived notion of what constitutes the best design in any particular context. I am sure this is not what Hobbs means. I understand that what he is trying to do is to argue against a simplistic notion of design, which I fully agree with. But at the same time, it is easy to get the impression from the text that there is another notion of design that is the key to good design. The key to good design is not Metro design language or any other language or principle. The key to good design is  to be able to execute good design judgment.

After six years in Indiana, I just got all my books shipped to me from Sweden. Among the books, I found a few copies of my PhD dissertation from 1991. The title is in Swedish "Designarbetets dolda rationalitet" [in English "The Hidden Rationality of Design Work "]. It was written in Swedish. Only one chapter is translated to English. Anyway, today I read parts of it and realized two things. First, I think the text is still quite good, which is kind of a surprise. I have not read or looked at it in more than ten years, maybe more. Secondly, I realized that almost all my scholarly work I do today can be traced back to my dissertation. This is not so much of a surprise, since I know other who have the same experience. You only do research on a very small set of ideas during your lifetime.

Anyway, even though the text was published in 1991, I am thinking about translating parts of it, or maybe more correct, translate and re-write parts of the text. It might finally become a book in English :-)
at May 16, 2012 22 comments:

Book note: "In Praise of Reason" by Michael P. Lynch

Reasons are the intellectual tools we use to convince others about our own perspective or solution. According the Michael P. Lynch, our society is facing a serious problem related to this daily human activity of reasoning. He argues that we have entered an era when many individuals and large groups do not accept the reasons of others as valid. There is a decrease in the trust of what he sees as the "common currency of reason", that is, there is less acceptance of the idea that we all, despite opinions and beliefs, are using the same fundamental set of rules and principles upon which we can constructively reason around a particular topic in a productive way. Instead, he argues that we see more people and groups expressing the idea that reasons are just a matter of belief. This leads to a situation where people do not have to listen to each others reason, not have to reflects upon the strength of their arguments, etc. Instead people take the position that they are just wrong or even stupid. Lynch shows how this have become common even in parts of our society that are supposed to rest on reasoning and the exchange of ideas, such as in politics.

Lynch book gives a thorough and detailed account for the existence of objective reasoning that we all have to relate to and "obey". Even though Lynch is a professional philosopher and the topic is advanced, he manages to make his case understandable and exciting. To me, his argumentation seems both solid and convincing. His evidence for the existence of reason as something that is possible to see as common to all of us is both elaborate and elegant, but at the same time accessible. His description of the problems that will arise if we do not accept a common understanding of reason is straightforward and should give us all reason to fear the future.

Lynch also writes about something that I find extra interesting and that is a clear definition of science. He makes the case that a common understanding of reason can and should be based on an abstracted version of what constitutes the scientific approach. He writes "part of what makes scientific practice distinctive is that it is comparatively intersubjective, transparent, repeatable, natural, and adaptable." (p 93). These features gives science the core quality that Lynch argues for which is an "open character". His detailed discussion about these qualities of science is highly interesting and is also relevant in a discussion about the difference between science and design.

At the end of the book, Lynch discusses the notion of truth especially in relation to Richard Rorty's idea of truth. Very interesting for those who are familiar with Rorty. He ends with a plea. He asks our society to seriously consider reason as a precondition for an open and democratic society. He argues that it is not just possible to develop a common ground and understanding about reason--it is necessary. Otherwise our society will slide further down into a state when reason is not respected and other forms of convincing becomes tools, such as, money, power, violence.

I highly recommend this book. The points I mentioned above are just some from Lynch rich text. Read and think.
at May 11, 2012 1 comment:

I am home after having spent almost a week at CHI 2012 in Austin, Texas. First two days I was chairing the doctoral consortium. The consortium is a way of looking into the future! The students are some of the best in the field and their work is what will be seen in CHI in a few years. I can not really say that there was a clear trend except that the diversity within HCI will grow even more.

The CHI conference itself was great. The last few years we have seen serious changes in the content of CHI. It is more diverse, more including of perspectives and approaches to HCI research. There were many papers that would never have been presented at CHI just a few years ago. Personally I am of course happy to see some more theoretically oriented papers and more design oriented papers. It was also exciting to see the interactivity exhibition, that is, all the new designs, artifacts and systems that manifest research in a more concrete way.

And then finally, all the people. Since I basically only go to one conference per year nowadays, CHI works greats. Almost everyone is there and your get a chance to reconnect and connect to colleagues during a few intense days. Discussions lead to new ideas and new collaborations. Thanks to everyone who organized the conference.
at May 11, 2012 No comments:

The MIT Press book series labeled "Design thinking, design theory"with me and Ken Friedman as Series Editors has now published three books! We are delighted about this and we of course expect to be able to publish more in the years to come. The three already published are: 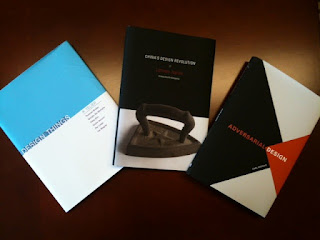 I hope you will enjoy these books and coming ones too. And maybe you also will be inspired to write your own book. If so, get in touch with me.
at May 01, 2012 No comments: