For many years I have been intrigued by the notion of Pattern Language as developed by Christopher Alexander. It is obvious that I am not the only one in the field of HCI and design in general who has found this particular way of structuring knowledge about design and designs interesting. There are numerous attempts by researchers and practitioners to develop pattern languages for one or the other aspect of interaction design. Personally, I have not been involved in any serious work with pattern language development or use, so I do not have a lot of hands-on experience, but I have since the first time I read about the idea in the early 1980s constantly reflected upon its fundamental assumptions, philosophical claims, and practical promises.

I am therefore very happy that Yue Pan (a phd student in HCI in my department) approached me and suggested a study on the present status of pattern language in our field. We are at the moment interviewing a number of people who have developed patterns and pattern languages and who have also written and published about their experiences. It seems as if the idea of pattern language in design has never become fully successful but at the same time the idea never goes away. There is a constant stream of new attempts to apply it in some way or another, and a constant stream of people who are again intrigued by the overall philosophy and idea.

How to stay competent in the field of interaction design

I am at the moment in Seattle for a few days doing interviews for our NSF project. The project is mainly focused on how professionals understand and use methods and tools. The study I am doing at the moment is aimed at the examination of professional competence and especially on what professionals do to stay competent over time. So far I have done four interviews with highly skilled and experienced UX professionals. They all have impressive experience and competence. It is fascinating with professionals at this level, they are confident, they know that they are competent, and they can explain why.  They also know how the industry works and what it takes to stay ahead and to survive in this competitive environment.

In my interviews, these professionals reveal their way of thinking about competence and what they do to stay competent in a rapidly developing field. Not staying ahead of the field, not knowing what is going on, not engaging with colleagues and networks to constantly learn, mean that you will not be the one who will be asked to lead the next project or to work on new creative initiatives. It is a competitive world where a large part of the professional competence is about understanding the corporate environment than knowing the correct tool or method.

The thoughtfulness of these professionals, something they reveal have developed over time, and their insights on what it means to be competent is something that every young professional in the field need to know. I hope that over time I will be able to write brief reports on this ongoing research. I am quite sure that the results will be highly valuable for professionals interested in developing their career. But I also think that the findings are extremely valuable for any employer who is interested in creating a culture where each professional can grow to become the best they can in a way that fits their individual personality and competence.

The interviews will continue. If you are interested in this topic, let me know, either as a professional (maybe to let me interview you) or as an employer who wants to learn more about how highly skilled professionals really think about themselves and their professional environment.

"The Design Way" 2nd Edition, MIT Press is now out! 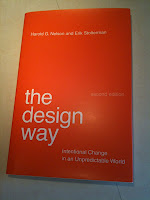 Today I got a package from MIT Press with copies of the 2nd Edition of mine and Harold Nelson's book "The Design Way". It looks very cook with a bright orange cover.

It is possible to order now from Amazon and other places. This is how it looks.

And below you can find the Table of Content and also the Preface to the Second Edition.

I THE FIRST TRADITION 11


Preface to the Second Edition

 It was with mixed feelings of excitement and hesitancy that we approached the opportunity and concomitant responsibility for developing a second edition of this book. The excitement came from the opportunity both to refine some of the ideas introduced in the first edition and to add many of the new ideas that we have been working with over the last few years. The hesitation came from the realization that we might easily make changes and additions that would not necessarily be seen as improvements over what was accomplished in the first edition.

The responses we received from readers of the first edition convinced us that there indeed had been a need for the kind of book about design we wrote. Based on feedback from an astonishingly broad spectrum of readers we realized that there are people from all around the globe who are deeply engaged in advancing design scholarship. We found that there are many design practitioners who devote a significant amount of time and effort to the development of both their understanding of design as well as their improved practice of design. We also discovered that there are an immense number of people, new to the game of design, who are interested in becoming designers in newly emerging fields and professions that were just beginning to appear when we published the first edition. In addition, the growing interest in adapting design thinking to established fields, domains, or professions became apparent from the diversity of backgrounds of the readers making contact with us.

It is with amazement and satisfaction that we have followed the devel- opment over the last few years of the increasing general interest among a broad set of stakeholders in design thinking, design theory, and even in the philosophy of design. We started our work on the first edition in the early 1990s, finalizing the writing about ten years later. During that time we had little idea that design learning, design thinking, and design practice would become such a recognized part of not only academia, but the realms of business and government as well.

The ever-growing interest in design as an important and essential approach to intentional change made it compelling to further develop our ideas from the first edition of this book. However, even if awareness and interest in design have grown, there is still a need for further advancing and championing the “big” ideas introduced in the first edition. We are still pushing to make a case for the recognition of design as its own intellectual and practical tradition of human inquiry and action on equal footing with science, art, and the humanities. Today it is even more important to make the case for an intellectually viable and well-grounded scholarly approach to design.

We see the second edition of our book as a continuation of the first edition’s support for the development of a widespread design culture and a philosophy of design that is stable and true to the “nature” of design. Our intention is that this new edition will be even more supportive of the individual designer learning how to think and act with increasing competence in a designerly way.

This second edition has gone through both large and small revisions. Every chapter has been refined and modified. We have revisited our use of core concepts and terms with the purpose of being more consistent. We have added, updated, or removed references where it was important to do so.

We have also changed our approach to graphics in the second edition. We have introduced the notion of schema as the primary means for representing holistic concepts, ideas, and fundamental knowledge in visual form. This means that there is an increased importance vested in the graphics—that is, the schemas—to expand and complement the text in revealing or reflecting deeper understandings of design.

Among the bigger changes that appear in the second edition are two re-written chapters—chapter 3, formerly “Systems,” is now “Systemics” and chapter 10, “Production and Caretaking,” is now “Craft and Material.” We have completely removed the last part of the first edition—Character and Competence—and added a new part V—A Drawing Together—with two new chapters—chapter 14, “Becoming a Designer,” and chapter 15, “Being a Designer.” We have added an epilogue—“The Way Forward”— where we invite the readers to take a look into the future of design and their own design futures.

We are extremely grateful to all the students and colleagues who have commented on and critiqued the book over the years. This includes non-academic colleagues and interested individuals as well who have provided us a tremendous amount of support and encouragement. The critiques, both positive and negative, have been very helpful and are appreciated. They have helped us to understand how we can further develop and com- municate our ideas—to make them more available and relevant to our readers.
We would like to thank our colleagues and students at Carnegie Mellon University; The Naval Postgraduate School; Indiana University Bloomington; and Umeå University, Sweden. We thank the School of Computer Science at the University of Montana for their support. We also thank Anne Nelson for her continued invaluable assistance in crafting the draft document. We are very appreciative of Robert Sandusky’s reviews of earlier drafts and his invaluable suggestions for their improvement.

We are particularly grateful to Doug Sery and the MIT Press for giving us this opportunity to publish the second edition of The Design Way.