I just received the book "Interaction Rituals" by Erving Goffman in the mail. I have not really read Goffman before but found the writing to resonate with my own thinking. Even though a lot of his work is in psychology and sociology it is possible to read his work as if it is about human-computer interaction and not only human-human interaction.

I found this great quote in the Introduction:

"I assume that the proper study of interaction is not the individual and his psychology, but rather the syntactical relations among the acts of different persons mutually present to one another. None the less, since it is individual actors who contribute the ultimate materials, it will always be reasonable to ask what general properties they must have if this sort of contribution is to be expected of them. What minimal model of the actor is needed if we are to wind him up, stick him amongst his fellows, and have an orderly traffic of behavior emerge?" (page 2).

It is possible to read this as if it is about human computer interaction. Contrary to most work in HCI today, which is almost completely focused on the "human" side of use and experience and not on the "computer" side, Goffman argues that it is possible to, or maybe even necessary to, develop models of the "ultimate material", which in this case would be also the artifact side of the interaction. It is "reasonable" to study what "general properties" the ultimate material must have to be able to contribute to the interaction in the way they do. I read this as similar to the approach that I have argued for in some articles, especially together with Lars-Erik Janlert, about the need and benefit of an analytical artifactist approach in HCI research.

Lars-Erik and I have since early 90s tried to develop a more analytical and artifact oriented approach to interaction studies (see refs and links below). In our 1997 article "The Character of Things" we examined, without using Goffman, the possibility of understanding human-artifact interaction as a form of human-human interaction. We experimented with ascribing artifacts "character" and "character traits" as a way to handle the overwhelming complexity arising by the manifold and diversity of new interactive products. We ended the article with the following paragraph:

"We believe that we must learn to better exploit the basic abilities human
beings have evolved in dealing with each other and with things in their
environment. One of these abilities is the use of characters. We propose
that in the design of computer artifacts: (1) more attention should be paid
to character, and the completeness and coherence of characteristics; and
(2) the design of characteristic features should be developed to better bring
out the (true) character of computer artifacts."

I am convinced that when interactive artifacts evolve and becomes more complex and with even richer behaviors it is generally a good idea to use human-human interaction as a model for inspiration. We deal with highly complex people on a daily basis, even people who are hostile, dishonest, etc. in their relations and behaviors towards us, but we still manage to interact to some extent. Of course it is important not to engage in such an analysis thinking that artifacts are humans. We are still far from a situation where human-human interaction can serve as prescriptive for any kind of more serious artifact design attempts, but they can certainly serve as a metaphorical inspiration for potential explanations and understandings.

[My reading of Goffman is when I write this restricted to just some small parts of the book "Interaction Rituals", so any form of mis-interpretation is possible.]

We also have one more article under review and one in progress on the same theme.
at August 13, 2013 No comments:

"How System Designers Think About Design and Methods"


In 1991 I defended my PhD dissertation. The dissertation was in Swedish. In those days we (or at least I) did not write many papers or articles, we focused on the dissertation, and I did not really publish anything from my dissertation in English,. However, I published one article in the Scandinavian Journal of Information Systems (1991) with the title "How system designers think about design and methods--some reflections based on an interview study". 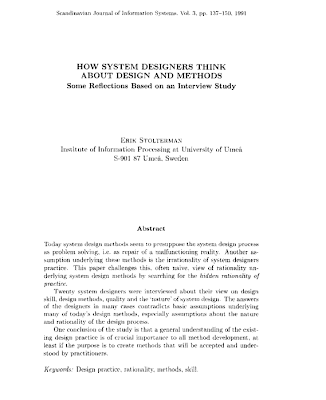 I have not seen this article in years and recently I realized I do not even have a copy. My colleague Jeff Bardzell has in some mysterious way been able to find it (the reasons for why he did this are for another post). He just sent me a pdf version of the article. Thanks Jeff!

[I just got a message from my old friend and colleague Peter Axel Nielsen that all SJIS articles are available online, and so is mine...so I have changed the link. Thanks Peter Axel!]

I am quite sure I have not read the article since 1991. As usual when you read something you wrote a long time ago you have different revelations. I realized that I am still working on and with the same ideas today as back then. I realized that I completely agree with myself. This can be seen as seriously sad or perhaps something good, I am not sure. I also realized that the article fits perfectly into the ongoing NSF project I am currently working on. It can be added to the papers we are writing today without any changes.

So, what about intellectual development and growth? Has nothing happened with me since then? Well, even if I still like the article, I can see what appears to be small changes in how I think. Reading myself, it is clear that my work today is grounded in a different way, and that it is connected to a much broader net of knowledge. At the same time, I can also see the optimism in the early writing, the lack of respect for big questions or for authorities or for the complexities of reality. Anyway, interesting reflections at least for me :-)

If you are working on anything related to design practice, design methods, etc. you should read the article. You can find it here.