"How to think" by Alan Jacobs

I just want to recommend Alan Jacobs new book "How to think --  a survival guide for a world at odds". It is a wonderful book that is easy to read about an extraordinarily important topic. What 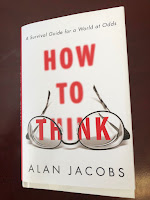 resonates with my own thinking is the argument that thinking is work, it leads to trouble, it is slow, and it is far from comforting. Excellent thinking about thinking. Great examples. Useful advice. Read it.
at November 21, 2017 No comments:

The Basic Anatomy of Interaction

What is interaction and how can we describe it? In our recent book "Things That Keep Us Busy--the elements of interaction" we take on this challenge and we develop, what we call, an anatomy of interaction.  We also develop a detailed account of when it is reasonable to say that interaction actually takes place. We do this by employing the notion of the "window of interaction" (more on that later).

Below I am briefly presenting some of the work on our anatomy of interaction (from Chapter 4 in the book, as a teaser :-)

The basic elements of the anatomy are artifact and user. Interaction takes places between a human and an artifact/system, as described in the figure below (4.3). 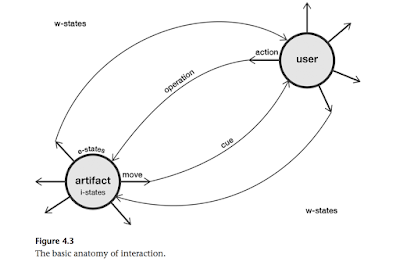 Some of the terms used in the figure need to be explained since they mean very specific things. First of all, an artifact has certain 'states':

• world states, or w-states for short, are states in the world outside the artifact or system causally connected with its functioning.


To fully describe the anatomy of interaction some more terms are needed (as defined in the glossary in the book):

Action (with respect to an artifact or system): an action that a human interactant can do in its fullness, here defined to include also the intention with the action; only used for human interactants

"Let us first look at the artifact or system end of the interaction. States can change. They can change as a result of an operation triggered by a user action. For digital artifacts and systems i-states as well as e-states are usually affected by an operation. They can also change as a result of the functioning of the artifact or system itself, what we will call a move. For digital artifacts and systems the changes caused by a move will concern first of all i-states, but frequently also e-states, and sometimes w-states.

Turning now to the human end of the interaction, we have already pointed out that user actions appear to the artifact or system as operations. Similarly, the moves of an artifact or system appear as cues to the user. A cue is the user’s perception of an artifact move: it is what the user perceives or experiences of a move, the impression of a move. Actions and cues are user- centered concepts. Cues come via e-state changes or w-state changes. When using a word processor the cues mainly stem from the changing images and symbols on the display, but in the case of a robot vacuum cleaner, the important cues will come rather from watching its physical movements, hearing the sounds it makes, and seeing dust and dirt disappear from the floor (all a matter of moves that change w-states). .....

Some great books on rationality

In my last post, I talked about my interest in the relationship between designing and rationality. Here are some of my major inspirational sources for this project. 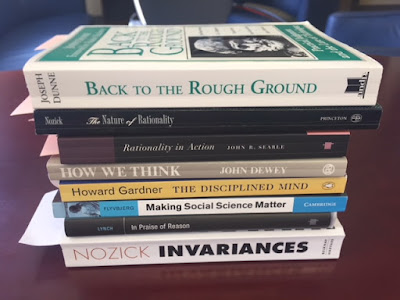 I have since my early days of being a Ph.D. student been intrigued by the question of what it means to be rational and to act rationally. This interest manifested itself in my Ph.D. dissertation that translated to English had the title "The Hidden Rationality of Design Work".

Reading about rationality has since then been a lifelong side project, almost like a hobby. I have not done so much writing on the topic but I have read. Recently I have started a book project around designing and rationality (maybe with a title similar to my dissertation, however with different content).

The main idea of this project is that the designing, as a major human approach for change, still struggles with a "hidden rationality". Even though today the praise of designing is stronger than ever before, it is far from clear what is the distinguishing features of the approach compared to other approaches. What is the rationality underlying designing that makes it into a unique approach and makes it possible to achieve outcomes that seems difficult when using other approaches?

There are a lot of superficial ideas about designing presented today as a design approach. In many cases, designing is not seen as anything more than some steps or phases and the use of some simple techniques. It is obvious that we would not define science in the same sense. So what if we treated designing as an approach that has to be understood and explained at the same depth as we do with science. This is what I think is needed and where my interest in rationality can help, I hope. I understand that this is ambitious and maybe overwhelmingly difficult but it is very exciting and maybe I will be able to develop the book project to at least relate to some of these big issues.

[For a long time I have been inspired by the book "The Nature of Rationality" by Robert Nozick. It is a wonderful book that develops a fundamental understanding of rationality and also opens up for a form of rationality that seems to resonate with design.]
at November 03, 2017 No comments: