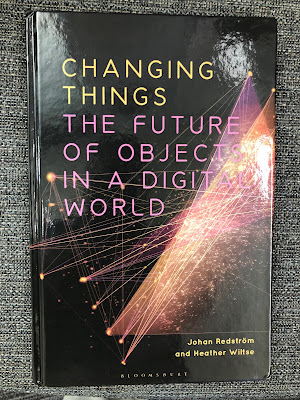 I just got in the mail a copy of the new book "Changing Things--the future of objects in a digital world" by my colleagues and friends Johan Redström and Heather Wiltse. I am so excited about this book we are presented with some new exciting concepts and a theoretical approach that has been missing. Anyone who is working on Internet-of-Things and our new connected reality will find grounded and fundamental support in this book.
book. It is one of the first books that explore how 'things' are radically changing with the digital transformation and how that effects are ways of thinking about things. It is obvious that a 'thing' is no longer a dead object that only has relevance in a particular location and time. Digital things are connected, they are part of every other thing, they make up an ever ongoing dynamic reality that presents new conceptual and philosophical challenges. How can we or should we think about things? In this
at December 20, 2018 No comments:

One of the aspects of designing that is not enough reflected upon is the notion of 'measure-of-success'. When we evaluate a design as good or bad, right or wrong, appropriate or adequate, we do that by employing some form of measuring and evaluating (I use 'measuring' as a very broad and inclusive activity). There are many forms of measure-of-success. They can a broad scope, they can be complex or simple, intuitive or well-defined, they can be recognized by many or by one.

The most personal and maybe least defined measure-of-success is if you like it, without any further explications of what "like it" is based on when it comes to qualities, variables, impact, etc. The opposite to that is probably the measure-of-success as established in most sciences, that is, a well-defined approach that has to be satisfied in all its details where the process has to show that it lives up to the explicit requirements of the scientific method.  Scientific results are expected to be the outcome of transparent processes that we can trace and inspect.

Interestingly enough, if a scientific process does live up to the requirements, we are not able to deny the outcome as a scientific result, no matter what we think about it. The measure-of-success "like it" does not apply.

Other traditions have other relationships with measuring. For instance, in art, there is little, if any, expectations that the artistic process has to be done in any specific way. No one cares if it is possible to trace and inspect the process. This does not mean that the measure-of-success is less complicated in art. Those who approach art only as a matter of "like it" are commonly seen as not knowing art and not having the needed sensibility of recognizing or 'measuring' art.

Another aspect in art is that one of the most determining factors in measuring success is the artist, the person. In science, of course, the person cannot be part of the measuring of success.

It is important to realize that it is not the case that a tradition or approach, such as designing, has a given measure-of-success that has to be used. It is definitely possible to use for instance a scientific approach to create something that is measured as a piece of art, or an artistic approach while expecting the result to be measured as a knowledge contribution. This is an exciting realization. I believe that often when we see highly creative outcomes it is when someone uses one tradition with the purpose to create something to be evaluated with the measure-of -uccess from another tradition. Of course, anyone who tries this has to be prepared of the harsh critique that will follow, unless the relationship between the process and the measure-of-success is made perfectly clear.

When I teach design theory or interaction design I often get questions about what is "good" or "better" when it comes to design. After a while, my students realize that the answer they get from me is never anything else than "it depends".

There are no universally "good" or "bad" qualities when it comes to any designed product or system. The only way to evaluate quality is in relation to purpose. And the purpose is dependent on the particular situation, time, stakeholders, users, decisionmakers, technology, resources, etc. A specific quality that may be seen as crucially good in one situation, may in another situation be an obvious bad quality. So, good design is only relevant in relation to purpose. It depends...

However, we can of course as designers and critics discuss what in general may be good qualities. This means that we are leaving the domain of design and moving into the domain of some sort of science where we try to establish universal qualities and their universal relevance. We will look for qualities that go across the particulars and move into the universals.

To determine what is good quality in a particular case and what can, in some sense, be understood as universally good are two completely separate and distinct activities. The students' question about what is "better" is often a consequence of them mixing these activities up. They are hoping to find answers about the particular based on what is universally true. Such hope is easy to understand since it would, if it was possible, release them from their own responsibility of making real design judgments. But it is a futile hope...
at December 14, 2018 No comments: