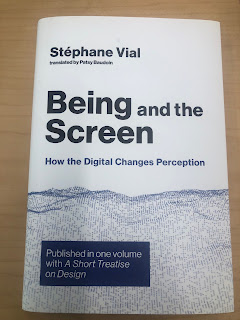 The latest addition to our MIT Press book series "Design Thinking/Design Theory" is by Stephane Vial with the title "Being and the screen - how the digital changes perception".

It is great to see this text finally translated to English and we are happy that we can publish it in our book series. Read and enjoy!!
at October 28, 2019 1 comment:

Predicting the future of interaction

Having lived through highly dynamic decades of technology and changing forms of interaction, it may feel as if it is impossible to predict what will come. And in many ways it is. We have over and over been surprised by new forms of interaction and interactivity. When we experience the new, we usually think "of course, why did we not see that coming".

One of the reasons why prediction in this field are rare and maybe not always so interesting is that it is a field dominated by people who are thinking as designers, that is, they focus on what can be done for certain people, in a specific situation and time, and on people's  particular needs and wants, etc. Designers are focused and driven by the particular (or as we have labeled it the "ultimate particular" in our book "The Design Way").

When the particular is your focus, the general or the universal becomes secondary. However, shifts in technology and technology use take place in the general and universal. Recognizing such broad and often deep changes requires a different way of looking. It requires a serious ambition to reveal and understand underlying structures and processes. This is not done by only being involved in design, it requires analytical investigations and conceptual and theoretical precision.

We never set out to predict the future of interaction at all. Only to develop a way of describing and explaining interaction. At the end of our work, we realized that when you have such a fundamental understanding you also have a 'tool' that makes it possible to project and to some extent predict the future. This is why our book ends with some future-looking projections or speculations of what we will see in the coming years. These are not predictions in the sense that they are wishes or personal speculations, they are more logical projections from where we are.

This has led me to even more appreciate what some might call 'basic research', that is, research that only has as its goal to capture, describe and explain existing phenomena. And, as a consequence, it has also led me to understand that the field of HCI could definitely need more basic research.
at October 15, 2019 1 comment: