I have from now, October 2021, moved my blog and site to https://www.stoltermanbergqvist.com/

The Challenge of Improving Designing

Happy to see that my latest article called "The Challenge of Improving Designing" now is published in the International Journal of Design. And the article is free to download to anyone.

I had the pleasure of being interviewed by Mehmet Aydin Baytas recently on my thoughts when it comes to design theory and philosophy. you can find both the video and the article at the link

The Future of Interaction

In the last chapter of our book "Things That Keep Us Busy - the elements of interaction" we spend some time on what the future of interaction might be. We tried to do it by extrapolating the analysis that we had done throughout the book. We did to be real and not too speculative. If we are right or wrong is up to you to decide.

I have included the first page here and the rest of the chapter can be found if follow the link.

interactivity would make us better equipped to imagine and approach the

future of interactivity. Obviously we cannot reliably predict what will happen,

but our examinations, conceptual developments, and terminological

emendations should at least improve our ability to explore different possible

futures. We have already engaged in explorations of some ongoing

or imminent developments by extending our understanding of interactivity

with ideas such as faceless interaction, the growing relevance of the

expressive-impressive thought style, and a changing view on control and

complexity. But in this final chapter we will indulge in some more speculative

ideas about the future, some lines of possible developments that we can

want it). Can we slow down? Not likely. Can we steer? Possibly. Clearly,

things can be done at the level of particular artifacts, systems, and designs.

They can intentionally be designed to move toward a certain imagined

future. And some things can probably be done at a higher level of design

insight and foresight. But a large part of the development might still be a

matter of large-scale systemic effects beyond any designer’s control. This

does not mean that explorations of what lies ahead are a waste of time: on

the contrary, by reflecting on potential futures, by formulating scenarios,

by naming trajectories, by defining emerging phenomena, by analyzing

consequences, we are not only exploring, we are also making potential

Janlert, Lars-Erik, and Erik Stolterman. Things That Keep Us Busy : The Elements of Interaction, MIT Press, 2017.

Going back to Bruno Latour and the role of "things"

Today I re-read his article from 2004 called "Why Has Critique Run out of Steam? From Matters of Fact to Matters of Concern". It is a long and complex text with highly delicate argumentation and reasoning. As always when reading Latour, he forces you to think and tricks you to believe that he is arguing for one position while in the next paragraph he turns it upside down.

I will not go into what the text is about or his arguments. But briefly, it is about the confusing situation that many "constructivists" found themselves in when they realized that their attempt to "deconstruct" facts and truth had similarities with the work of those who advocate conspiracies and those who (for other reasons) claim that there is no truth. Latour lays out a complex argumentation that leads to what can be seen as a new form of critique and a reconsidering of the meaning and role of "things". Challenge yourself and read it.

The Evil of Design

In design theory or design thinking, we do not often talk about the evil of design. However, we all know that design, with or without intent, can lead to outcomes that are undesirable or even destructive to the world around us. In our book “The Design Way – intentional change in an unpredictable world” we dedicate one chapter to the notion of the evil of design. Below are a couple excerpts.

and evil. This is not the same pairing of apparent opposites as the more

common duality of good and evil. We are not talking about Evil, with a

capital E, designating malevolent forces dedicated to the destruction of

everything that is good in the world, or counter to the positive presence

of God as in many religious traditions. It is true that design has been considered

evil in this way. Some designs have been attributed to the work of

the devil or the influence of evil spirits. For instance, a European bishop

banned the use of rifled barrels on guns, because the resulting superior

accuracy over the old, smooth-bore muskets could only be due to the

“Our first category is natural evil, which is always an integral part of the

process of change, including the types of changes wrought by design. This

is a form of evil that is an unavoidable part of all life. In any creative act,

is then destroyed. There may be good and necessary reasons for the change

brought on by design, but that does not deny the real and painful experience

of grief and emptiness, brought by the loss of that which has been replaced.

By definition, any design is an act going beyond established boundaries—

in other words, “thinking outside the box.” This is also one of the oldest

definitions of evil. In most cases, everyday designing isn’t considered

boundary crossing or breaking because those boundaries that such

in the same sense as a taboo, for example. Moreover, these boundaries

usually are not even visible as boundaries for behavior.

• Natural order of life—survival at any cost

• Using others as a means only

Categories of evil in design

Those designs and designers that are seen as causing changes affecting

the normal routine of life, however, often are treated with a certain amount

of irritation, if not outright hostility. This is because they have crossed a

boundary maintaining the defined limits of normal or typical everyday

activity. This form of design evil can be perilous to the designer, because

even if the change is for the benefit of those affected, the designer is still

cast as an enemy of people’s peace of mind and their routine existence.

New designs always bring shadows with them. There are always unintended

consequences associated with new designs, many of which can be

quite negative. This is related to another, more obvious natural evil—the

loss of opportunities. When a design is brought into the world and made

real, its very presence excludes other opportunities. The substantial investment

of money, energy, material, and time in a new design directly prohibits

other attempts to make alternative designs and realities because of

lack of resources. This also holds true for more abstract investments, such

as pride and status. This is because identity and self-image become invested

design’s meaningful presence. This form of evil is closely related to the

“survival-at-any-cost” strategy of evolution. Even though it appears this

strategy is the essence of nature, in our human vocabulary it carries the

suspicion of being an evil that seriously needs to be redeemed.

them as evil because of our human frame of reference. The material, corporeal

world forms the substance of design, yet this realm is considered

evil and base in many spiritual traditions. Humans are encouraged to avoid

focusing on this aspect of life, yet it is the very material from which a

designer assembles his or her design palette.

that evil is a natural and eminent force in the affairs of people: one must

continually balance and compensate for the effect of this unrelenting evil

energy that’s always at work in the natural order of things.

Our second category is accidental evil. This type of design evil can be

thought of as avoidable. Some examples are: power without understanding,

to consequences), and the misfortune of being in the wrong place

at the wrong time as a matter of mischance, bad luck, or tragedy. This form

of evil happens out of ignorance, carelessness, or inattention and is not

the outcome of an intention to do harm. For example, the design of toys

that are actually dangerous for children is the consequence of inattention

to those being served. Accidental evil can be modified, or mitigated, by

becoming more fully informed and aware when engaging in design.

Good design judgments are dependent on having the right design

knowledge, but that’s not all. Design knowledge cannot be separated from

the “knower.” Therefore, in design, character counts. This is similar to the

way that good character counts in making wise decisions, in the absence

of a predetermined outcome. Good design is dependent on good designers

as much as on the best information or know-how.

Finally, there is the category of willful evil. In a design context, this

includes power without charity and agency without community—in other

words, acting on people’s behalf without their contractual consent to do

so. It also includes dominance over others such as collective dominance

over the individual, individual dominance over the collective, and individual

dominance over another individual. The Kantian form of willful evil

involves the use of people as a means only rather than an end. Finally, it

of design. The history of human affairs is filled with designs that were evil

by intention, such as those of Albert Speer, the German architect, who

among other things created organizational designs based on slave labor for

the Nazis during World War II. A more recent example is the design of

Web-based technology that intrudes on unsuspecting users of the World

Wide Web. This design also shields the identity of all those involved in

the creation and use of child pornography websites, for example. Powerful

design theories and approaches can be used in the creation of things,

concrete or abstract, that history will hold as evil in the most literal sense,

such as the design of nuclear weapons, which were considered defensible

does not assure that good design will be the outcome. The theories and

practices of design are still subject to human willfulness. As human beings

intentions as well as magnificent designs. That challenge is well beyond

the scope of this book, but it is an essential consideration for designers

My co-author Harold Nelson and I heard for a while that there is a Chinese version of our book "The Design Way - intentional change in an unpredictable world" (MIT Press, 2012). Just the other day, one of my students, who is in China, helped us and sent two copies of the book to me. It is so exciting to see our work in Chinese. The book looks good with great graphics, but to what extent the text is close to the original, I cannot judge :-) 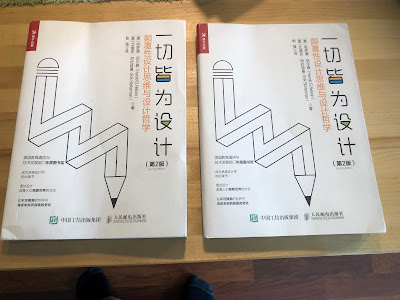