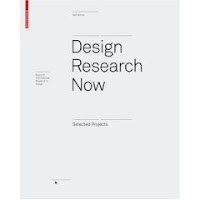 I just got a new book that I had ordered, it is called "Design Research Now" edited by Ralf Michel. It is new book and a beautiful book! It is with excitement that I am looking forward to read it since some of my favorite design thinkers have contributed chapters on topics that look promising. Without having read the book, it looks like a perfect book for a more advanced design theory or design philosophy course. However, the bad thing is the prize,on Amazon it is about $95!

I will come back with some kind of review when I have had more time to read it!
at November 30, 2007 2 comments:

Jeff Bezos and Amazon.com offers a new digital book reader tool. It is called the Amazon Kindle. Just by looking at the descriptions and videos you get quite a good idea about the design. I think this is a design that deserves examination. The Kindle has some new technology, such as the use of e-ink. I have no idea if and how the Kindle will work as a reading tool. But from a design point of view it raises some interesting questions. It is for instance clear that the design is intentionally not aimed at adding as much functionality as possible. There are several serious limitations, but they are all intentional and based on a clear design idea, which is that this is first of all (and maybe only) a reading device. It is not a phone, a pda,it does not contain a browser, etc, it seems as if it is not even a calculator! Does it have a clock :-) It comes with free wifi but only to the Amazon e-bookstore and Wikipedia. Anyhow, is this a sign of what we will see in the the coming years of interaction design? Devices and tools that are designed for very specific purposes, ignoring opportunities and features that would be so easy to add? Well, we'll see. There are no real good reviews yet of the Kindle, mostly descriptions, so we will wait and see....
at November 20, 2007 4 comments:

Well, I have used my iPhone now since August. It is becoming more clear all the time that it is a great design for me. It is so nice to use. Of course, I have realized some things that I miss, but I am convinced that those functions will be there soon. The most interesting observation is that some people show me or try to convince me that there are other phones with the same or even more functionality, and I know that is true. But the overall experience of the iPhone makes those comparisons quite uninteresting. The overall interactive gestalt of the iPhone is what makes it unique. To me the iPhone as a design shows that design is about the whole and the relations between details and the whole. It is a design that shows that less functionality (or what some would call compromises) does not have to be a negative thing if it is designerly composed into the whole and fits the overall design.
at November 18, 2007 3 comments:

These last weeks I have met people from the Human Robot Interaction research field (Jodi Forlizzi, CMU and Peter Kahn, UW, and our new colleague Matthias Scheutz, IU). It has been highly interesting and I have learnt and realized things that I had not thought about. It is clear that the two fields are moving closer to each other with a growing overlap. If HRI has primarily been addressing the internal workings of a robot, HCI has been all about interaction. When HRI now actually can build robots with quite interesting and sophisticated qualities, the design challenges between the fields are becoming similar. Interaction design is becoming more aware of the dynamic and interactive (even intelligent) environment that people experience as part of their reality. Maybe the only difference is that robots move and environments do not! A "smart" home is a form of non-movable but highly interactive robot. Interaction with a robot with some kind of human persona is getting more common, as well as interaction with environments that have human characteristics when it comes to interaction (if not in their appearance). Anyhow, all this brings the two fields together in a way that is exciting and promising and, I think, good for both fields. So, let's study human interaction with robots or environments in whatever form and shape they come. We have only seen the beginning....By the way, this is also what Don Norman's new book is about (see my last post!).
at November 03, 2007 5 comments: