HCI research contributions to the world of knowledge

Here is a fun exercise:

make a list of the knowledge contributions that HCI research has produced over the years.

First some definitions:
Assume that HCI research is about the interaction between humans and interactive computational objects.

The human part is quite straightforward. It refers to any human being, groups, organizations or societies of human beings.

The "computer" part is less clear, but to me, it makes sense to see that as interactive computational objects. Both interactive and computational seem to be part of a general understanding in our field. There are many objects that are not computational but interactive, or the other way around, but we mainly focus on those type of objects that are both. The notion of object is of course complicated. Traditionally it refers to physical machines, but it has changed and can now be any composition and manifestation of functionality that anyone sees as the part a human is interacting with. Ok, these definitions are not enough, but a simple starting point for the exercise.

So, if this is what HCI research is studying with the purpose to understand, explain, reveal, challenge, and improve etc. then what are the major contributions that the field has produced over the years? What do we know about this interaction between humans and interactive computational objects?

Of course, there is a huge pile of knowledge that our field has produced about details when it comes to interfaces, interaction, design and development, technological aspects, etc. But, what if we try to formulate contributions at a very high level of abstraction.

It would be exciting to see the field try to formulate some major knowledge contributions that would complement the world of knowledge. Of course, it does not mean that the field would agree on these contributions but at least they would be seen as some kind of substantial knowledge that other fields and the world would benefit from knowing. 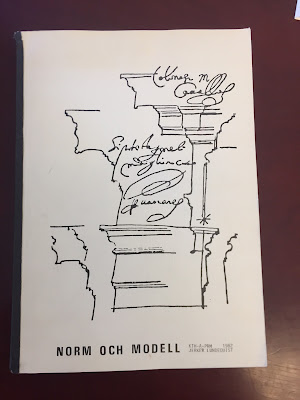 Why designing is not irrational

When I look back on my own research over the years, the notion of rationality has always been at the core of my studies. Actually, my Ph.D. dissertation had the title "The Hidden Rationality of Design Work". The core idea of the dissertation was that as long as we can't reveal the hidden rationality of designing, it will stay difficult to describe and understand, and even more important...teach. The study of designing has since then made huge progress in revealing the 'hidden rationality' of design (see Schon, Cross, Krippendorff, etc).

One of the major problems with the notion of rationality is, to me, that people confuse what being rational means with one specific interpretation. This narrow understanding of being rational is highly influenced by what is seen as the highest form of rationality--the scientific process. But most people do recognize that depending on what we are trying to achieve, we need to embrace different forms of reasoning. It is crucial to understand that we have to embrace the notion that rationality comes in many flavors, each bringing certain strengths and weaknesses. If this is not understood, it becomes a problem.

To argue that designing is irrational is, therefore, a mistake. Designers are rational and have a well-developed rationality (if they are good at what they do). Designing requires both logic and rationality, but it is a logic and rationality that is aimed at exploring and developing new ideas that can lead to not-yet-existing designs. This means that what is rational as a designer is not the same as what is applied by someone involved in trying to explain how reality works or create an understanding of some particular aspect of our reality. Design thinking is aimed at changing reality into something that we do not know what it is,  into something that is only an imagination. Such a process requires certain forms of thinking and acting, it requires a certain form of rationality. The 'hidden' rationality of designing.

Ok, this is already too long, but as a takeaway idea, I would propose that anyone involved in the study of designing or has ambitions to improve designing spend a bit more time trying to understand the notion of rationality. It is a theoretical tool that is extremely important in any exploration of human approaches of inquiry and action.

Stolterman, E. (2008). The nature of design practice and implications for interaction design research. in  International Journal of Design, 2(1).
at June 02, 2017 No comments: